Created in collaboration with GameSalad’s own Game Team One, Popular Mechanics has just released “Be The Spark”. Be the Spark, is a simple mechanics game that challenges the player to keep an engine running by triggering the spark plug at the right moment during the four-stroke cycle. The free app is available for download on the iTunes App Store.

The “delightfully geeky” app first appeared within the monthly iPad subscription of Popular Mechanics. The app was initially conceptualized as a partnership between GameSalad and Popular Mechanics to showcase the prospects of DIY game creation, specifically with GameSalad software. Stating that, “anyone with creativity and some doggedness can use GameSalad’s software to build a game without doing any programming.” 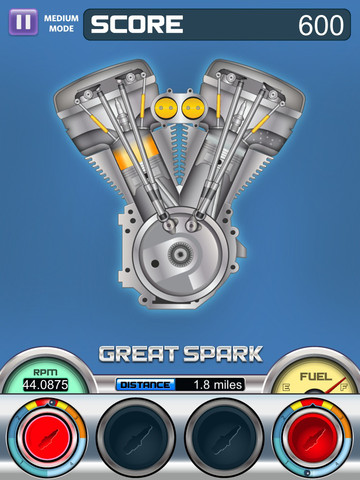 Popular Mechanics also featured GameSalad in a previous article on game creation by John Herrman. Herrman stated that, “using GameSalad feels more like editing a PowerPoint presentation than developing a mobile application. Two hours after opening the program, I had my own side-scrolling space shooter in the can. It wasn’t quite ready for the App Store—my “spaceship” was a crude cutout of my head, and my “laser battles” took place against a photo background of my living room—but nonetheless, it was a game. A few more days of practice could have netted something presentable. It’s easy to let your imagination run away with GameSalad, which is probably the point.”

GameSalad is proud to announce that in the coming week we will be releasing a free game template and art asset pack from the Be the Spark game. The items will be available for free download on GameSalad Marketplace. We encourage aspiring game makers to use these materials and explore the world of DIY game development for yourself.