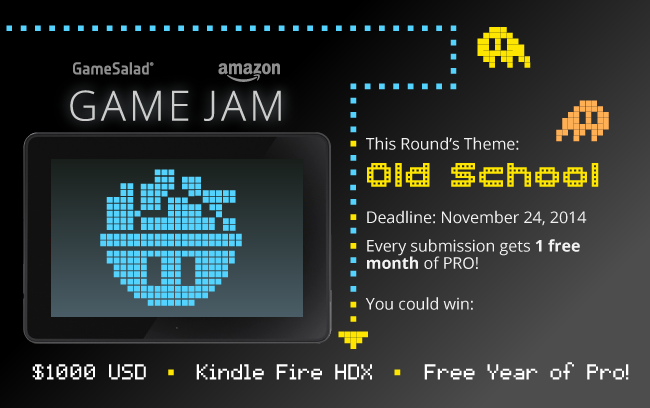 The theme for the second competition in GameSalad Game Jam 2014 has been announced, and it’s “Old School.” Deadline for submissions to this competition is November 24, 2014. Every game submitted gets 1 free month of PRO membership. Every developer that submits one or more games has the same chance of winning a prize.

GameSalad Game Jam 2014 is a series of rapid game development competitions using the GameSalad Creator that culminate in cash and prizes, promotion on GameSalad Arcade and Amazon, and the ultimate bragging rights in GameSalad game development. This is the second of two competitions, each with a different theme, with two weeks to develop your game and submit your entry.

The top three games from both Game Jam competitions will be selected by GameSalad staff to receive a year of GameSalad PRO membership, and additional promotion for the game and the developer.

Additionally, 6 winners will be drawn at random to receive these fabulous prizes!

You only have two weeks, so focus on replay value and fun. Think “cartoon short” rather than “epic movie.” Each game however must be fully functional, contain at least one complete level, and be otherwise polished and free of bugs. All games submitted need to be designed for and tested on touch devices as well as desktop browsers.

* GameSalad will publish select games on Amazon for promotional purposes, with developers retaining all IP rights.