Booger Boing is a fun platform puzzler with unique and sticky gameplay and theme! Use your finger to stretch and bounce your booger through a variety of challenging levels! 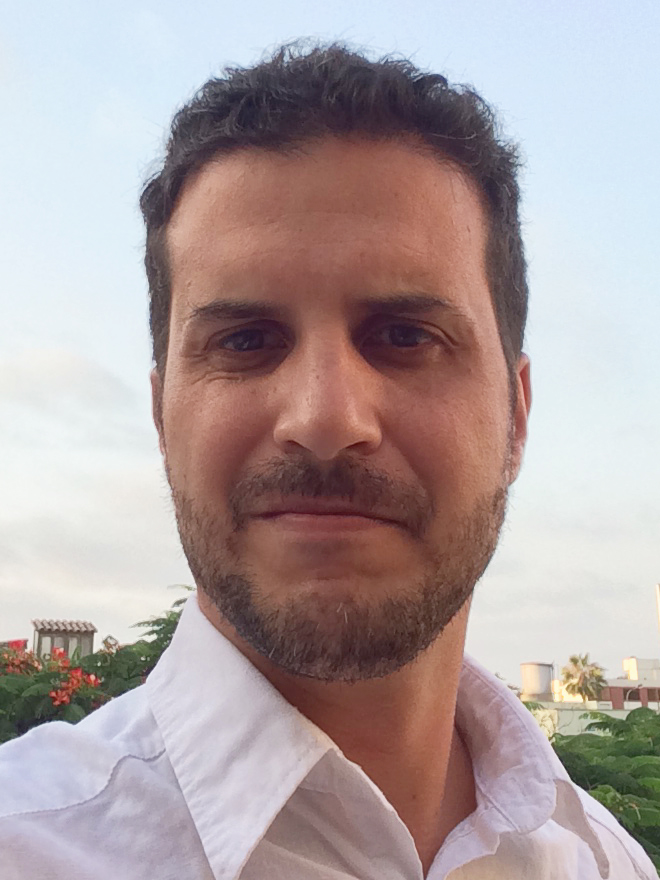 Ezequiel: My name is Ezequiel “Cheche” Cabrera, Peruvian, architect by day and game developer in my spare time. I have being interested in game development since I was a kid, dreaming of developing my own NES games. It was in college, in the early 2000’s, that I made my first simple PC games. However, it was not until I discovered GamSsalad about 4 years ago that I made game developing one of my hobbies. With it, I have published 5 games for mobile devices, and made many unpublished game prototypes. I am a solo creator (background music aside). I love being able to develop a whole game on my own, having almost 0 knowledge of computer programming.

GameSalad: What inspired you to make a game like Booger Boing? It certainly is an original concept!

Ezequiel: When I started working with it I was looking to combining a “slingshot” mechanic with a platform game. At first it had a totally different theme – it was a hen shooting eggs – but as soon as sticking on walls became part of the game, it hit me… it was obvious this game was about a stretchy booger! I know is not the most elegant or fancy character, but sometimes you cant argue with your inner child!

Ezequiel: GameSalad is a wonderful tool, especially for those of us who have no idea how to code! I particularly enjoy the fact that it is fun to just use it. I love the challenge that it is to solve the logic needed for making a game idea a reality, and it is super rewarding seeing your imagined worlds come to life, and the characters able to follow your orders in just minutes. 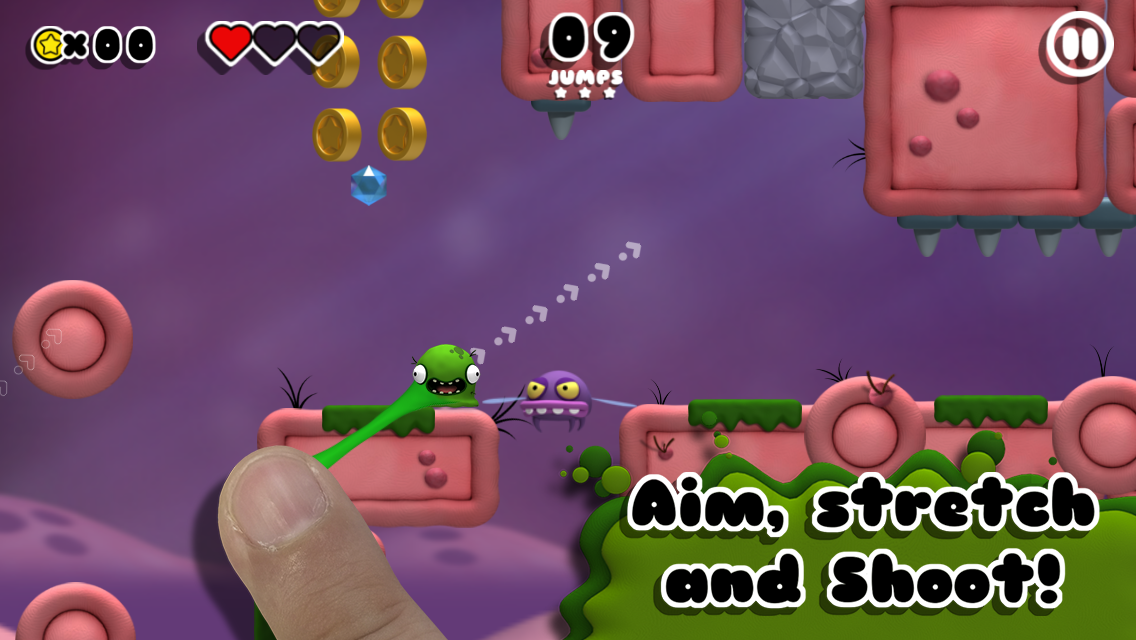 GameSalad: It really is great how quickly GameSalad can bring ideas to life! Have you been pleased with the final version of Booger Boing? Did it meet your expectations?

Ezequiel: I am very pleased with Booger Boing. I still want to add some features to it, some more animations for the characters, and many more levels. Those will be coming in future updates!

GameSalad: What were the greatest challenges you faced creating Booger Boing?

Ezequiel: I spent way too much time making decisions about the design of the game. It had many features that took many nights to accomplish, but in the end they didn’t contribute to a better game experience, so they had to be scrapped. Level design was much harder than expected. Keeping them fun and unique, and with a balanced difficulty was hard work, especially since I didn’t have many beta testers. 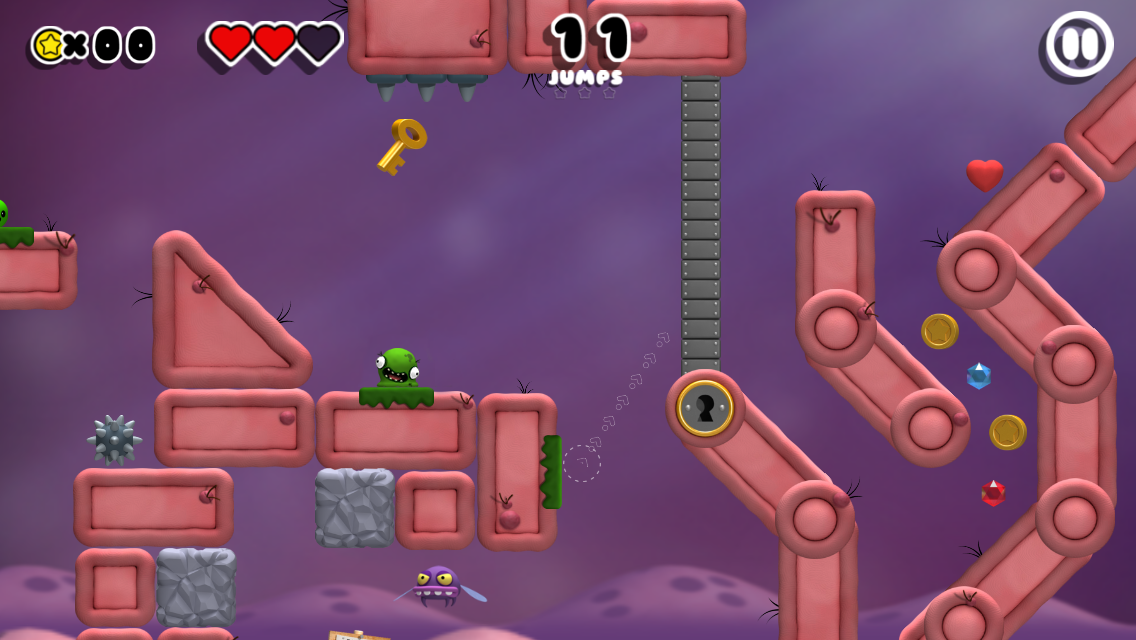 GameSalad: How long did you work on it?

Ezequiel: I started developing Booger Boing almost 3 years ago. I worked on it every now and then, and in between I developed and published two other games – “Ripple Munch” and “Go home, You are Drunk”. It was not until the beginning of this year that I worked on it almost every week night.

GameSalad: You’ve certainly been getting the most out of GameSalad by the sound of it! Any tips or advice you’d like to share with other GameSalad developers?

Ezequiel: Above all be sure the mechanic and core idea of your game are fun, and the game basics are clear and resolved before working on graphics or even a theme. Enjoy the developing process, and be realistic with your expectations. 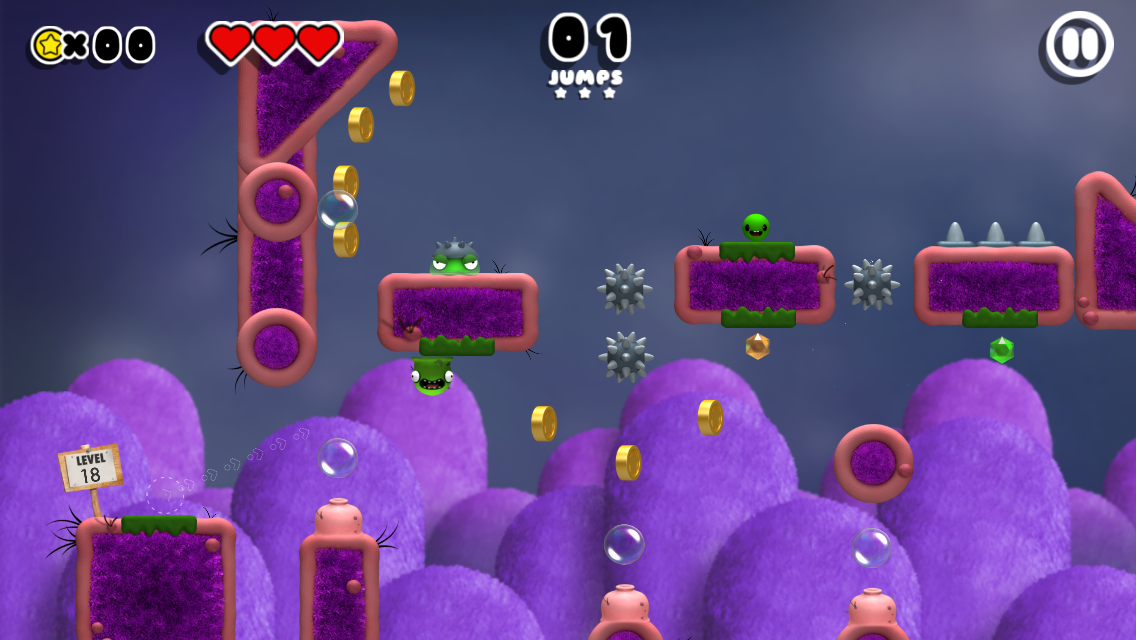 GameSalad: That sounds like great advice! When you’re not developing games, what are some of your hobbies outside of GameSalad?

Ezequiel: I really have little time for hobbies, my job as an architect takes up most of my time. When not using GameSalad I like reading about technology, science and gadgets, watching silly cartoons and playing old school video games with my girlfriend (she can’t beat me yet in Dr. Mario), as well as sharing time with my friends. I really wish I could travel more often.

GameSalad: What do you plan on doing next?

Ezequiel: Right now I am trying to get Booger Boing noticed on the App Store (it is much more difficult now than a few years ago). I have some game prototypes with potential hanging around that are waiting for a little more work to come alive. Surely I will keep enjoying GameSalad for a long while.

GameSalad: Well we certainly look forward to seeing what you do next!

If you love platformers, puzzles or boogers, then Booger Boing is the game for you! It’s currently available for FREE on iTunes (https://itunes.apple.com/us/app/booger-boing/id1010520318?ls=1&mt=8) and Google Play (https://play.google.com/store/apps/details?id=com.chechesoft.boogerboing), so go get it! If you need more convincing, check out the trailer (https://youtu.be/w1i5mRCcR5I)!