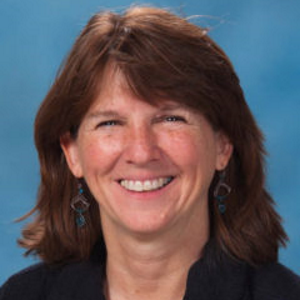 This teacher uses her experience in the business world to help her students become lifelong learners.

Many teachers recognize the importance of “real world experience”, but few have a wealth of private-sector experience to draw from while educating their students. Fortunately for Wimberley High School students, Denise Jackson is one of those few.

Mrs. Jackson spent eight years in the Texas public school system in the 1990’s before embarking on a career in the corporate world that spanned from entrepreneurial pursuits to a senior role in a Fortune 500 company. But she recently returned to teaching, hoping to bring her business experience and passion for developing leaders back to her students.

Mrs. Jackson knew she wanted to teach a class that would engage her students, but also one that would challenge them, encourage them to work in a group, and learn to work under deadline pressure and within customer constraints. And of course, whatever the course was would need to have a strong basis in STEM fundamentals. It occurred to her that a game design program could be exactly what she had in mind.

In 2012, Wimberley High began its Game Design program. Initially, the plan was to wait until students had a basic level of familiarity with basic programming and game design concepts (using a combination of web-focused CodeAcademy courses and some supplementary game design lessons), then move onto game development toolkits.

But it wasn’t until GameSalad was introduced to the class that students truly began to understand the possibilities and potential of programming:

“All students play games but few realized the effort behind creating them. We went from a full year of Javascript and small classes to tremendously increasing the enrollment and allowing students to create as they learn. GameSalad opened their eyes to what they could accomplish.“

Engagement soared, and Jackson began brainstorming how to better integrate GameSalad into her curriculum.

Jackson’s entrepreneurial instincts kicked in. She realized that by restructuring the game design program appropriately, the course could benefit multiple student populations in the district: students in her class would learn how to develop mobile applications and games, and their class projects could be educational games that could be deployed to elementary-aged students in conjunction with the 1:1 iPad plan the district had adopted. 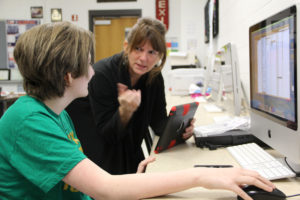 With the help of a grant from the Wimberley Education Foundation, Wimberley High School was able to purchase academic licenses of GameSalad. Students were assigned to build games that educated elementary students based on the Texas Essential Knowledge and Skills (TEKS) requirements, a set of academic standards used in the state similar to the Common Core Standards.

Students created simple 2D games using backgrounds, avatars, NPCs, and enemies they created using Adobe Photoshop. While some students initially limited their development to simple behaviors and actions, others explored advanced features such as randomness, looping, and control to create some truly unique games, an experience that was inspiring and exciting for everyone involved.

Now in the program’s second year, students are taking on even more ambitious projects, and many enroll in Mrs. Jackson’s other courses including 3D Modeling and Animation and Entrepreneurship. For Denise, it’s all about giving her students the tools and confidence to succeed in an increasingly competitive world:

“Today’s youth are faced with more competition than ever before. By equipping them with the power of knowledge and new skill sets – like game design using GameSalad’s tool set – we are giving them the gift of advancement.“

Strictly Necessary Cookie should be enabled at all times so that we can save your preferences for cookie settings.